Welcome to the Southside Permaculture Park’s official website. In this 4-part post series, we will dive deeper into the many of the topics that we have touched on earlier as we explore the philosophy of the SSPP. This series is intended to supplement other posts and our About page, allowing readers to get a better understanding of not just the practice, but the theory behind the Southside Permaculture Park and what makes it so radical, unique, and revolutionary.

Part 1: Introduction to Permaculture and the SSPP

Part 3: Human/Nature Dualism, Contradictions, and the Thermodynamics of Civilization

Permaculture is a holistic design philosophy, rooted in systems science and observations of the ecosystem, for creating stable human-oriented systems. Permaculture focuses on relationships between elements, creating space for mutually-supportive interactions.

Rather than isolated elements in mere proximity, we allow for the transfer of matter, energy, and information between elements, allowing them to share, support, and communicate. The result is an overall increase in productivity, stability, and adaptability of the system.

Each link in the chain is only connected to the two links immediately adjacent. If even a single link anywhere in the chain were to fail, the entire load would drop to the ground and the chain will be useless.

Each thread in the web is connected to half a dozen others; there is a strong sense of interconnectivity within the web. Now, cut a single thread. What happens? Nothing. Cut a few more; anything yet? The interconnectivity of a spider web allows that even if 30-40% of the threads fail, the web still maintains much of its structure and functionality: it can still catch flies. 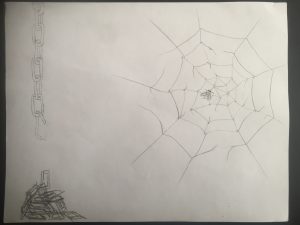 In practice, permaculture can take many forms. The most obvious is in relation to plants, animals, and fungi – so called “agricultural systems”.

To see how permaculture and the concepts of interconnectivity can improve the stability, productivity, and adaptability of agricultural systems, check out our Guild Highlight, tutorials, and various plant profiles. Even if any element in the guild fails, the guild overall does not because every element serves multiple functions and in turn every function is supported by multiple elements.

In addition to the agricultural aspect, principles of permaculture are applied at various scales throughout the Southside Permaculture Park.

Although providing food is a critically important function of the SSPP, it is certainly not its only function. The park also provides medicines in the form of herbs and mushroom extracts; Exercise, education programming, and live music from the Calitheater; recreation; and social support.

We can reject the capitalist axiom that defines us all as isolated individuals locked in perpetual competition with everyone else, and instead accept that community is better than mere proximity and that cooperation is better than competition. Today’s society is plagued with social isolation, loneliness, and depression, which takes serious tolls on peoples’ physical and mental health. This loneliness and isolation can lead to bigger problems like violence, drug abuse, and self-harm. People who previously only lived near each other but never interacted can now come together to relax in the park, form friendships, and be able to support each other emotionally, leaving everyone better off.

It’s interesting to note how the social isolation that has become so omnipresent in today’s industrial society directly mirrors the isolation and fragmentation of industrial production. This will be the subject of next week’s post; so stay tuned!