In the absence of human intervention, species of plants, animals, fungi, and bacterial automatically group themselves together in ways that mutually benefit all those involved. Old-growth forest is a prime example of this, with squirrels burying nuts that grow trees that shade fungi and on and on. Modern human systems notoriously lack these relationships (think industrial monocultures).

In permaculture, the goal is to learn these lessons about how these species like to group themselves by observation, and then attempt to recreate those connections in systems that actively involve humans. We call such arrangements guilds.

Today we will explore one particular guild in the center of the Southside Permaculture Park. 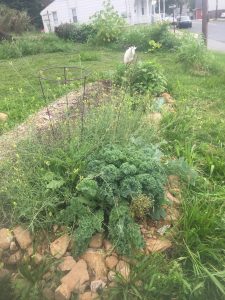 The guild is built in a swaled raised bed, built along contour to harvest maximum rain water without getting flooded and swampy. When digging the trench, many rocks were excavated and used to build a retaining wall on the north (downslope) side that hold in soil but allows for drainage, while also providing habitat for beneficial organisms like spiders. The trench is then filled with wood chips and inoculated with the fungi Stropharia rugoso-annulata, which forms a mycorrhizal relationship with the roots of the plants, providing them with greater access to water and nutrients, while also supplying anti-microbial and anti-biotic compounds to protect the plants from infection. In return, the plants supply the fungus with sugars from photosynthesis.

The central elements in this bed are an American Persimmon tree and an American Filbert shrub. The two large elements are arranged east-west so as to not block the sunlight from each other. Each provides and edible yield for people, but both do much more than that.

Birds take shelter in the bushy filbert, and in the winter they feed on the male catkins of the filbert and the sweet fruit of the persimmon. These birds then act as pest control, eating caterpillars and beetles that would otherwise plague the plants like edible and delicious sea kale and curly kale. These kale, with their dense roots, act as a barrier preventing the grass from encroaching in on the garden bed.

Crimson clover is another ground cover, also with flowers that attract beneficial insects, that fixes nitrogen into the soil, eliminating the need for synthetic nitrogen fertilizers. Turkish rocket provides edible components, and its deep taproot brings up mineral nutrients from deep in the soil and stores them in its abundant leaves, which can then be chopped and dropped as mulch to build soil and fertility.

Anise hyssop and lemon balm, with their fragrant aromas, protects the central elements from deer browse, while also attracting beneficial insects and providing medicinal herbs. Aromatic garlic and onions deter rodents like squirrels from burring their nuts in the bed and can help reduce rabbit browse.

As you can see, every element serves multiple functions, and every function is supported by multiple elements. The output of any element is the input of another. The result is a highly interconnected web of mutually-supporting relations, such that the whole is much greater than the sum of its parts. It is highly productive and very adaptive to change.

As time goes on and we continue to observe and interact with this guild, we may add or subtract elements as needed. We know that this will not be the final form of this bed, but we make space for connections and incorporate variety whenever possible, planning for the long-term succession of land.

Apply Self-Regulation & Accept Feedback, Catch & Store Energy, Creatively Use & Respond to Change, Design from Patterns to Details, Integrate Rather than Segregate, Observe and Interact, Obtain a Yield, Permaculture Principles, Produce No Waste, Use & Value Renewable Resources & Services, Use and Value Diversity, Use Edges & Value the Marginal, Use Small & Slow Solutions