Fungi are largely ignored and misunderstood by modern society, though their abilities could offer solutions to a broad spectrum of issues that plague our civilization.

Many people think fungi are inherently dangerous, that most mushrooms are either deadly, toxic, or will leave you feeling unwell and make you sick. People think that fungi, like molds, are gross and signal unhealthiness.

In fact, this couldn’t be farther from the truth. Mushrooms as a whole are no more toxic than vascular plants; you are just as likely to poison yourself randomly grazing on leaves and berries as you are from foraging mushrooms. What’s more, over 90% of all mushroom-related fatalities are from a single family of mushrooms (Amanitaceae) which is very easy to identify.

Because of this negative reputation, fungi as a whole are largely left out of our systems, but they hold the key to sustainable, regenerative systems!

Fungi are automatic recyclers, exuding enzymes that break down the cellulose and lignin from plants and turn it into fertile soil, all the while producing highly nutritious food. Without fungi, there would be no soil, and thus no terrestrial life as we know it. 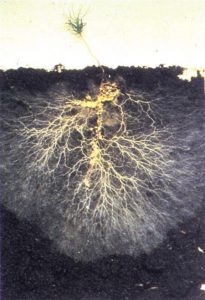 While many people think plants where the first to colonize the land, it was actually fungi that made it possible. Lichens are a group of symbiotic organisms composed of a fungus and an algae or cyanobacteria. The fungi provides the structure while the algae/cyanobacteria provides sugars from photosynthesis. The fungi exudes enzymes that break apart the rock, allowing it to absorb the minerals needed to support the composite organism [47]. Lichens that broke down the rocks are what paved the way for other terrestrial plants, and eventually, animals [48].

This fungal support network that dates back nearly half a billion years is still present today; over 90% of plants form some sort of mycorrhizal relationship with fungi [49]. The fungi provide the plants with greater access to water and mineral nutrients [50], improve the immune response of plants making them more resistant to pest and disease [51], and increase drought resistance [52]. In some cases, the mycorrhizal network actually connects all the individual plants in a given area (like a forest) into one network, allowing them to share resources and transmit chemical signals about attacks, making them more resilient to insect and animal browse [53, 54]. Many people have likened these mycorrhizal networks to the internet or even the human brain, and based on the scale and complexity of connections in the network, some have even suggested that mycorrhizal forests could constitute single a self-conscious entity.

But fungi do more than just recycle plant matter and connect the forests together, they can be used to remediate the damages done by humans on other ecosystems. Mycoremediation is the process of repairing systems and undoing damages through the use of fungi. Certain fungi have been shown to break down petroleum compound and clean up oil spills, bringing back to life land destroyed by industrialism [55]. Many species of fungi hyper-accumulate heavy metals, remediating soils contaminated with lead and mercury [55].

Many fungal species have also proven to be highly medicinal, with applications in treating everything from colds to cancers to post-traumatic stress and addiction [35, 36, 55-58].

Fungi as a whole make life as we know it possible, and they hold the key to building sustainable, regenerative systems and to repairing the damages done by humans; both on the ecosystem at large and on ourselves. If we can model the systems we create to be more like that of the mycorrhizae, perhaps we can avoid catastrophe and create a better world for all.

Design from Patterns to Details, Integrate Rather than Segregate, Obtain a Yield, People Care, Permaculture Principles, Produce No Waste