Human civilization may seem so extraordinarily complicated that it can never be understood in all its minute details and complexities. And indeed it is, but some simple principles of physics allow us to make general claims about society as a whole; at the systems-level.

In physics, things move from areas of high concentration to areas of low concentration. This is always the case, except when enough external energy is applied to maintain that gradient. 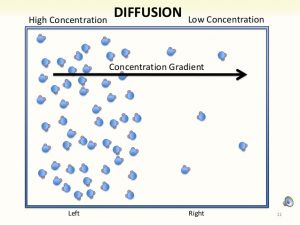 We are all aware of this principle, if not explicitly, in our everyday lives. When you pour milk into a cup of coffee, the milk does not stay concentrated together, but rather it diffuses out into the coffee so that the concentration of milk in coffee is equal everywhere. When someone farts in a room, at first the flatulent gasses are in a high concentration and the smell is foul, but with time the gasses diffuse throughout the room and the concentration evens out so that no particular space smells much at all.

In many home water purification systems, minerals and other impurities in drinking water are forced to travel up the concentration gradient, from low to high, seemingly defying this principle. But in fact it is only due to the energy supplied by an external pressure that allows contaminants to travel from areas of low concentration to areas of high concentration; remove this external pressure and diffusion will bring the two sides to equilibrium.

Historically, agriculture provided the energy needed to concentrate people into towns and cities. Tilling breaks down energy stored in organ matter in the soil and allows it to be converted into human food (this process is discussed in more detail in this post on Industrial Agriculture and Food Security). Form much of our societies history, the concentration gradient of people was maintained and expanded by appropriating energy stored in soils through the practice of annual till agriculture.

With the rise of industrialization and the steam engine, a new source of energy emerged: fossil fuels like coal, oil, and gas. The tremendous energy potential in these ancient hydrocarbons allowed the human population to expand dramatically, but disproportionately. 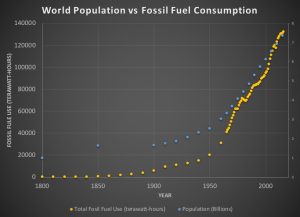 According to the US Census, nearly two thirds of the US population lives in just over 3% of the nation’s land area [33], and the percentage of people in cities is only increasing. This it true in cities all around the world.

The energy in fossil fuels is what has allowed the human concentration gradient to be maintained.

So what happens when these fossil fuels run out?

Using current production and usage data, we have about 50 years left with of oil and gas, and about 100 years worth of coal. More than half of those reserves are “unburnable” if we want to maintain a climate suitable for human life [34].

We are left with the hard fact that if we want to maintain a livable planet then we need to reduce our fossil fuel consumption dramatically and rapidly. Some of the energy usage can be replaced with renewables like wind and solar, but the fertilizer that our current industrial food system depends on requires natural gas for its production.

At some point in the not-so-distant future, we will be unable to provide the energy that maintains our population gradient, and diffusion will set about restoring equilibrium.

This means that people in densely populated cities, unable to access sufficient food and other forms of energy, will move out towards less populated rural areas.

Regenerative agricultural techniques like those practice at the Southside Permaculture Park can help lessen the burden on cities, reducing their energy demands and providing energy in the form of food and biomass locally, but the way things are organized now there simply won’t be enough to maintain the current gradient. Suburban and rural areas should take note of this now while there is still time to build the infrastructure to support the inevitable influx of people emigrating from the cities. If we plan well and act now, we can still avoid catastrophe.

Data for chart supplied by references [31] and [32], chart compiled by Southside Permaculture Park.