With lots of snow followed by warmer weather, there’s lots of water flowing everywhere. Here on the mountain, that water rushes with gravity downslope towards the river, but on its way it picks up a little something extra.

Walking around Lehigh’s campus, I observed that the soil alongside the sidewalks was heavily eroded, with massive channels carved out by the flowing water. 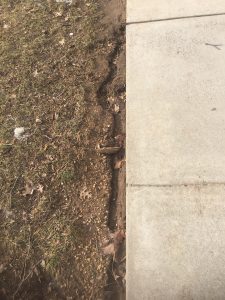 As the snow melt accelerated down the mountain along the straight edge of the sidewalk, it picked up massive amounts of sediment. When the flow reached an intersection in the sidewalk, it dumped much of this accumulated sediment onto the pavement in what looks like a volcanic eruption. 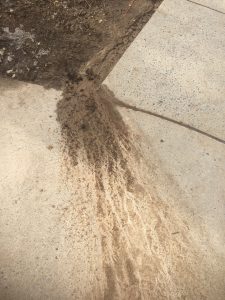 It’s easy to think that this is just a necessary consequence of snow melting and flowing down the mountain, but actually it is a sign of poor land management, and it is a serious issue at both the small and the large scale.

If you take a walk into the forest, you’ll notice that you don’t see the same deep-cut channels and massive sediment explosions that you see along the side walk. Even on the grassy lawn just a few yards in from the sidewalk the erosion is considerably less.

The first key feature to observe about the sidewalk is the unbroken straightness of its edges.

As the water rushes down the slope in a perfectly straight line, it is unable to decelerate at any point, and so it continues to increase in velocity as it moves down the mountain. Some gentle curves would reduce the intensity of the slope and therefore the force causing the water to accelerate, and also provide opportunities to deposit any sediment it did accumulate.

The second key feature is all the salt that is laid down to melt the ice on the sidewalks.

The salt dissolves in the melting snow and gets washed away with the rain, where it gets deposited alongside the sidewalk. Such high concentrations of salt kill any vegetation that might be growing there, meaning there are not roots to hold the soil together. With the structural integrity of the soil destroyed, the rapidly accelerating water can wash it right away.

It might not seem like a big deal if some soil next to a sidewalk erodes, but this is actually just a small-scale case study of what is happening at a much much larger scale, causing critical agricultural soils to erode into the rivers leaving us starving on a pile of forsaken dust.

The expansion of cities and roads leads to more and more paved surfaces, which are impermeable to water and have straight edges that encourage water to accelerate to high velocities. Strip mines and quarries also create such straight edges that are conducive to accelerated flows. Deforestation for agriculture and “development” destroys the structure that once held the soils together, allowing them to erode away into the streams and rivers. Trees are also incredibly useful in reducing the velocity of wind and rain as it falls to the Earth, protecting the soil below from high energy impacts that facilitate erosion. Without the trees, the soil is without protection. Increased storm severity due to climate change only compounds these effects.

Flowing water will, if left on its own, automatically meander in a way that maximizes the amount of edge. This can be seen on a small scale with the flowing water next to the sidewalk and at much larger scales like massive rivers and streams. This meandering is of critical importance for maintain a stable ecology. As attempts to straighten rivers has shown, straighter rivers move faster and have significantly more soil erosion. Straightening rivers also leads to the destruction of wetland habitats that are critical hubs for biodiversity and water purification, increased flooding downstream, and overall loss of biomass production [113-115].

What these examples, small and large, have shown us, is that we need to design from patterns to details and, where possible, avoid straight lines and utilize curves to maximize edges. This will reduce erosion and increase biodiversity and biomass productivity.

I’m not saying we can (or even should) stop all erosion, but when the rate of soil loss is greater than the rate of soil creation, there is a serious issue that threatens not just humans, but nearly all terrestrial life. There are, however, lots of things we can do to combat this issue.

On the small scale,

we can build on contour to encourage the slow spreading of water through the landscape. When we do have to go up or down in elevation, we can do so with longer, meandering paths that gradually slow water flow and encourage frequent deposition of smaller amounts of sediment.

We can retrofit impermeable surfaces like buildings, parking lots, and roads with rain gardens and other methods of water catchment to slow it down.

On a larger scale,

we can ensure that all new buildings and other impermeable surfaces are designed to accommodate for the the runoff with green roofs, rain gardens, ponds, or other methods. We can reforest huge swaths of land so build root structure and cover to hold in and protect the soil, while also generating a yearly blanket of leaves to build it back up.

One of the biggest things we can do as individuals and smaller communities is to plant trees that provides us with our direct needs of survival. I’m talking about a forest garden. Just imagine if we could get all our food from the forest — nuts, berries, mushrooms, herbs, deer, turkeys, bear, fish — how different our world would be. How much we would reduce our net CO2 emissions, how much more soil we could build, and how much healthier and happier we could all be!

Projects like the Southside Permaculture Park are designed to create such infrastructure to protect the environment that sustains us while providing for our needs today, and to empower others to do the same. Planting a seed is something anyone can do locally, even if it is on the side of a road or in an abandoned lot somewhere, that has consequences that ripple out into the global sphere. 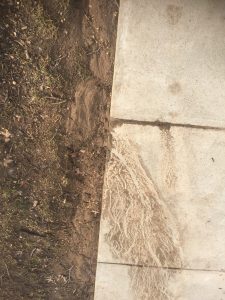 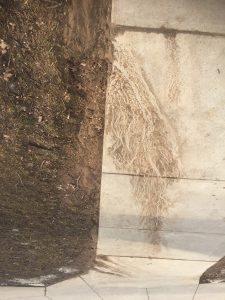 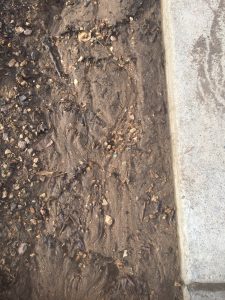 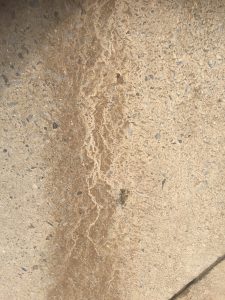 Design from Patterns to Details, Earth Care, Observe and Interact, Use Edges & Value the Marginal