The land where the Southside Permaculture Park exists today, and much of the land in Eastern PA, northern DE, southern NY, and NJ, is part of the area of Lenapehoking, “Land of the Lenape”.

The people of Lenapehoking (prior to European contact, that is) where a semi-nomadic bunch of families, largely decentralized and living in relative peace with one another. Populations were fairly small and scarce, resources were abundant, and the archeological record shows that any sort of large-scale war or tribal feudalism was unknown to the people of Lenapehoking.

While these people were largely sustained by hunting, gathering, and fishing, they were also engaged in some gardening, and would create semi-permanent settlements around such gardens during the warmer months of the year (at least during the mid/late woodland period, ca. 0-1600 AD). During the winter, the many families clustered around these settlements would split up in search of game, and would then reconvene back at these sites the following spring [109].

The methods of gardening used by these people were extremely ecologically functional, highly regenerative, and very multi-functional and productive; essentially, they were methods of permaculture!

Of course, the people of Lenapehoking did not have the word “permaculture”, but they did not need it. These regenerative, ecologically functional practices simply were their culture!

Having such a long tradition as hunters and gatherers, these people were extremely familiar with the normal conditions in which plants would grow, and in their gardens they would mimic those conditions where they planted. (Observe and Interact, Design from Patterns to Details)

When they would clear areas on the edge of the woods for planting, they would use the felled trees for canoes or long-houses, and would only clear small areas at a time to preserve the diversity of the different micro-biomes. (Produce no Waste, Small & Slow Solutions, Use & Value Diversity)

They would build these gardens and their settlements on the edges of the woods, where diverse understory plants where abundant and where animals would frequently travel back and forth between the shelter of the woods and the abundant grasses and herbaceous plants of the meadows and river banks. (Use Edges & Value the Marginal) 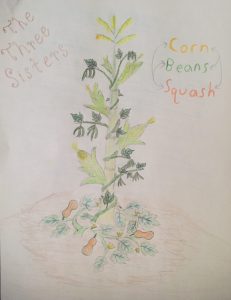 The Three Sisters is a small polyculture consisting of Corn, Beans, and Squash. They are planted together because each provides important yields on their own, but each also contributes to the health and success of the others. (Integrate Rather than Segregate, Obtain a Yield )

In April in small mounds (swales, perhaps?) would be planted out with corn and squash. In mid May, when the corn was at least a few inches tall, vining beans would be planted out in the same mounds. The corn, growing tall and strong, would provide a trellis on which the beans could vine. The beans, in turn, would fix nitrogen into the soil, improving the growth of the corn and the squash. The squash, with its sprawling habit and large leaves, would protect the ground around the corn and beans from harsh, drying wind and sun, as well as from erosion due to heavy rain, thus helping to regulate the soil microclimate and improve overall growth. It is very likely that corn was also sometimes substituted for sunflowers. The sunflowers fill the role of a trellis, but also attract a range of pollinators and predatory insects to protect the other crops, as well as birds who will come for the seeds and then snack on any slugs, beetles, or other large herbivorous insects.

The beans provide a dense source of proteins and fats, while the corn and squash provide carbohydrates. The corn husks were used for a number of non-culinary tasks, sometimes being woven into fabrics for clothing, mixed with clay for cobb structures and insulation, or tied up and made into dolls, and the silk was brewed into a tea and used for kidney ailments. The hard outer shells of the squashes were used for storage containers for dried goods, or as bowls or scoopers for soups and hot beverages.

While many of the people of Lenapehoking practiced some form of gardening, it is important to note that they were by no means dependent on it for their survival. Such gardens provided more (human) food in a given area, but it came at the expense of an increase in the amount of labor required, and a decrease in the freedom to move about. There were many people living in Lenapehoking who did not take up gardening, and instead chose to live solely on what the spirits provided for them; and indeed the spirits did provide. Even those who did practice gardening were careful not to let the population grow too much, as they understood that they were not any more or less important than any other creature; the land did not belong to them, it was merely borrowed; and it was of critical importance that no one species take too much or grow out of proportion. For each much take only their Fair Share.

***Note: All information regarding the customs and culture of the people of Lenapehoking is based on accounts from their descendants, archeological evidence, and written records from European sources, and is accurate to the best of our knowledge. We believe that the culture and customs of these people contain critical information on how to (re)structure our society to avoid collapse and extinction. Any information, be it books, movies, and especially first-hand accounts from those descended of indigenous population, is welcome and encouraged. If you notice any information presented here that you believe to be inaccurate, please reach out to us about it. Information about these cultures is not easy to come by, as it has been systematically erased over the last 500 years, but we must try. We must learn and relearn together to figure out how to move forward.

Design from Patterns to Details, Integrate Rather than Segregate, Observe and Interact, Obtain a Yield, Produce No Waste, Use and Value Diversity, Use Edges & Value the Marginal, Use Small & Slow Solutions

One Reply to “Lenape ‘Permaculture’: The Three Sisters”