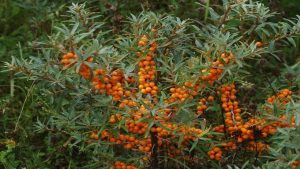 Seaberry, also known as Sea Buckthorn, is a perennial deciduous shrub that grows 2-4 meters tall. The leaves are long and thin, about 6-8 cm by 1-2 cm, alternate, with a silverish green hue. Individual plants are either male or female, with the male flowers clustered in groups of four to six and the female flowers produced alone. The fruit are produced on the female plant and are orange/red, ovoid, and about 1-2 cm in length.

Seaberry will grow well in most soil types, but prefers deep, well draining sandy loam. Seaberry is drought tolerant, but can be sensitive to excessive moisture [60]. It requires full sun for fruit development. Seaberry fixes nitrogen through nodules of bacteria on their roots. Some sources say they require sufficient phosphorus in the soil for this process [61], but we have seen seaberries with lots of healthy nodules even in poor soils, so if the soil is healthy and fed with mulch and compost you should never have to worry about it. Seaberries can also tolerate relatively salty conditions. Plants can be propagated by seed, by hardwood or softwood cuttings, or by root suckers. Female plants will bear fruit in the fourth or fifth year if planted from seed, or in the third or fourth year if planted from cuttings, but only if a male plant is close by. Pruning to allow more light penetration and promote the growth of lateral shoots can increase the yields and fruiting life of seaberries. Pruning will also cause roots to die back and deposit significant nitrogen into the soil for surrounding plants to use.

Sea berry fruit are exceptionally tasty, if a bit sour, with a grapefruit-like flavor with hints of mango and guava. They are higher in vitamin C than oranges [62], and can be eaten raw, becoming sweeter after a frost. Berries can also be pressed, the juice separating into an oily layer that is often used in cosmetics and a water layer that can be added to drinks. The berries can also be used to make jams and jellies. As a nitrogen fixer and tolerator of poor, salty soils, seaberry can also be used for soil reclamation. If managed properly, seaberry can serve as a nurse plant for larger tree species, feeding it when young and then being cut back once the tree is more mature.

Sea berry can be used as a nurse plant along with large fruit and nut trees (not black walnut) to provide them with nitrogen when young. Seaberry must be managed to allow light to the tree.

They also work very well with herbaceous perennials that are more shade tolerant, allowing for some highly functional and diverse polycultures.

*Note: Image of berries from https://www.youtube.com/watch?v=9aabNVT6WVY.