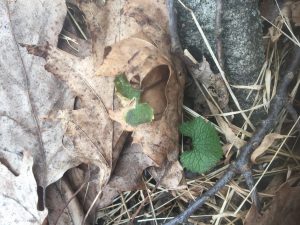 Garlic mustard is an herbaceous biennial plant that grows mostly in the understory of deciduous woods, but it can also be found in un-mowed clearings or along roadsides.

In its first year, garlic mustard stays low to the ground and grows in rosettes of serrated, round leaves. These leaves will smell of garlic when crushed, and are usually dark green, sometimes with purple on the underside. The plant forms a deep white taproot in which it stores energy for the following year.

After overwintering, garlic mustard shoots up in its second year with a tall stem, usually around 50 cm, but sometimes up to one meter. The leaves are more spade-shaped in its second year, still serrate, and arranged alternately along the stem. The plant will produce clusters of small (~1cm), white, four-petaled flowers that give way to a thin podlike fruit containing a few dozen dark brown seeds, each about the size of a grain of sand. After setting seed, the plant will die and leave a dry hollow stalk in its place.

Garlic mustard is considered to be an invasive species, and thus its intentional cultivation is not recommended. Garlic mustard produces gluconsinolate compounds from its roots that have detrimental effects on the mycorrhizal fungi that support other plants in the ecosystem. While it has been shown that the production of these harmful compounds decreases significantly with population age, and that after 20-30 years the population should decrease significantly and reach a balance with the ecosystem [118], the effects of glucosinolates on soil an ecosystem ecology can be much longer lasting, thus control of this plant is advised.

Although conservation groups like The Nature Conservancy advocate for the use of herbicides like glyphosate, this practice is very harmful to plants and humans alike, and as we have seen in Beyond the War on Invasive Species, does not remediate the underlying causes of the invasion.

Research has shown that while garlic mustard does gain a competitive edge due to production of glucosinolates, one of the most significant factors in its proliferation is actually the abundance of “native” white tailed deer! [119, 120] In fact, this study in the Journal AOB Plants suggests that in areas where deer are completely excluded, garlic mustard populations are projected to locally drop to extinction! This is because deer do not feed on garlic mustard, but instead favor other “native” plants. When deer are overpopulated (as they are now in much of the northeast), they browse these native plants so hard that they cannot compete with garlic mustard. When deer population are reduced in number, however, the native plants are able to successfully outcompete garlic mustard, despite its production of glucosinolates.

Therefore, instead of trying to poison the garlic mustard at an individual level, we should take a whole systems perspective to change the underlying conditions for the invasion. Substituting beef in our diets for locally hunted deer would not only help to control the spread of garlic mustard, but also significantly reduce our carbon footprints, as beef is a huge emitter. Hunting deer could also provide us with warm furs for clothing, bones for making utensils and tools, and sinew for thread and binding.

In addition to controlling deer populations to remove garlic mustard’s competitive edge, we can also introduce additional predators to reduce its numbers. I’m not talking about foreign weevils or moths; I’m talking about humans! Garlic mustard is a tasty and highly nutritious herb, rich in vitamins A and C. By collecting garlic mustard when we go out into the woods, we are helping to reduce its population while at the same time benefiting personally from the plant. Conservation groups like to use one-time community-service model that treats population management as a chore to be completed once and then checked off a list, but by incorporating garlic mustard into our diets, control of its population becomes a matter of our everyday lives.

Garlic mustard is a tasty herb with flavors of both garlic and mustard. It can be used in broths and stews, stir fried or sautéed with other vegetables, as a salad green, or in a tasty garlic mustard pesto.

Garlic mustard also has a history of medicinal use as a disinfectant for wounds and as a diuretic.

Garlic mustard does not get along well with others, but you can certainly use it in the kitchen!