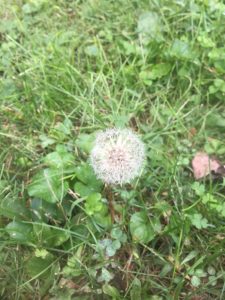 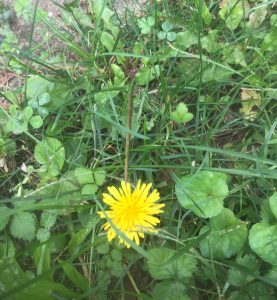 Dandelion may be one of the most iconically famous (or infamous) plants in the park. Its bright yellow flowers and fluffy seed heads are easily recognizable, and their long, saw-tooth leaves form rosettes that most can identity even without the flowers.

While dandelion has a plethora of uses, many people have been brainwashed by corporations like Monsanto (the manufacturer of RoundUp) into thinking of it as a “noxious weed” that must be removed by any means necessary.

It’s strong taproot means dandelion thrives on poor, compacted soils (like those in a depleted mowed lawn) and is very drought tolerant. It generally shows up uninvited or without any effort on the part of the gardener, but can be direct sown from seed pretty much any time the ground is thawed. If dandelion is found growing somewhere you don’t want it, first take a minute to reflect on why it is growing there, what role it is playing, and how that niche can be filled by something else (maybe you’ll discover that in fact you DO want a dandelion there!). Second, if it still makes sense to remove it, dig around it and pull up from the base to remove the entire taproot. Never try to uproot a dandelion by the leaves, as it will re-sprout vigorously from the taproot.

Dandelion has a wide array of edible, medicinal, and recreational uses. The entire plant is edible, with the young leaves and flowers making a tangy addition to salads. The leaves tend to get tougher and bitter with age, so older leaves are best boiled first or used as a potherb. Leaves of all ages also make great Dande-Crisps! The flower buds and flowers can also be eaten raw, steamed, or sautéed. Both the leaves and flowers are very rich in vitamins and minerals, as well as antioxidants and anti-inflammatory compounds.[64] The flowers and leaves are also 15 and 18% protein respectively! [64] The root can be roasted and brewed into a caffeine-free coffee substitute or baked in a fashion similar to parsnip.

Historically, dandelion has been used to treat inflammation, bile and liver problems, and urinary tract infections. Recent research has validated many of these claims [64, 65] and also suggests that dandelion might be effective in treating Type 2 Diabetes. [66]

Dandelion also excretes a white, latex-filled sap when severed, and modern researchers have been able to convert this sap into a rubber that is very similar to the rubber produced by rubber trees. [67]

Because of its taproot, dandelion is great at de-compacting soils and providing necessary minerals to the topsoil when the leaves decay, thus making them an excellent companion plant in an annual or perennial bed. The flowers are also an important early-spring source of pollen and nectar for bees and other beneficial insects. They make a great addition to an edible lawn.

Beyond these material uses, dandelion also brings many aesthetic and recreational joys. Few things bring a smile to a child’s face like blowing the seeds off a dandelion and watching them blow away in the wind, and a dandelion flower behind your ear or in a glass of water on a desk or table is sure to bring joy to all who see it.