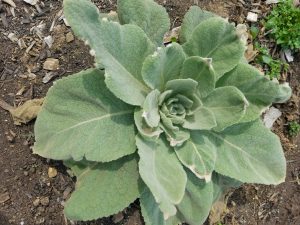 Mullein is a plant often found in the wild, consisting of silvery green, fuzzy leaves. It is biennial, meaning that it lives for two years. The plant grows to be 2 to 7 feet tall and 2.5 feet wide, and its leaves are 4 to 12 inches long and 1 to 5 inches wide. In its second year of life, mullein grows a flower spike consisting of small bright yellow, 5-petaled flowers in a dense cluster. The flowers bloom from June to September and each bloom opens before sunrise and closes by mid-afternoon each day. Mullein is considered a weed, meaning it grows very extensively. This plant has been used by civilizations for thousands of years. It has a long history of use in folk medicine in Europe and North America, and is even featured in some folk tales that were passed on. In ancient times it was believed to possess magical qualities, including warding off evil, bringing courage, health, protection and love, and improving fertility.

Mullein grows best in poor soil that is compacted. It prefers dry and slightly alkaline soil. The soil should be kept moist when growing from a seed, but once grown it does not require much moisture. However, one the flowers start to bloom it should begin to be watered more frequently.

The plants should be spaced between 1-3 feet apart, depending on the size of the particular variety of mullein being planted. It should be planted in spaces that are not polluted in order to obtain the best yield. Mullein grows best with full sun exposure and in Hardiness Zones 3-9. In order for the plant to survive a second year and bloom its flowers, it must undergo vernalization, meaning it must be exposed to cold temperatures.

Mullein leaves can be harvested at any time of the year, and the flowers should be harvested in the mornings during the summer once the dew has dried for the day.

Mullein can often improve soil conditions so that other plants may grow in an area. It is best planted in poor soil, and its roots grow deep and break up that soil. Its leaves add nutrients to the soil once they die, creating a better soil environment for future plants to grow in.

Mullein is used mainly for medicinal purposes. Its leaves can be used to make tea and its extract can be turned into syrup. Mullein has been found to contain polyphenols, which have antioxidant and anti-inflammatory properties. It is used to alleviate symptoms of many respiratory conditions, such as coughs, whooping cough, tuberculosis, bronchitis, pneumonia, and more. It is also often applied to the skin to soften and protect it, especially in the case of eczema, wounds, burns, hemorrhoids, and infections. The plant is often used to treat earaches and ear infections and is found to be very effective in their treatment. Some studies have shown mullein to have antiviral properties against influenza and herpes, as well as antibacterial properties against E.coli, Klebsiella pneumoniae, and staphylococcus aureus.

It is important to exercise caution when using Mullein as a medicine and consult a doctor before use. There is not enough scientific research to confirm its effectiveness as a treatment for these conditions; its effectiveness is just backed up by anecdotal evidence.