Yesterday, as I was about to take a nap, I heard the forest calling to me. I quickly threw on some jeans and boots, made some tea in a thermos, grabbed an old shopping bag for foraged goods, and headed out the door.

I had many positive exchanges with the forrest community – trees, plants, fungi, animals – and in our communication they shared with me a few lessons that I thought I might in turn share with you.

The first lesson is a way to regulate temperatures and make it through the cold winter months.

Walking around, a barberry called my attention to its ingenious strategy. Barberries don’t have coats of fur, but they do make small thickets and they do have thorns. When the trees drop their leaves, strong winds blow them around and the barberries catch them in the thicket and hold them with their thorns. This mesh of leaves creates pockets of still air where the metabolic activity of plants, fungi, and bacteria can heat them up. Since the wind cannot effectively reach these pockets, they stay warmer then the surrounding air and keep the central stems and root mass from suffering excessive frost damage. In effect, this network of pockets between the leaves acts like a bubble-wrap thermal insulation around the plant! 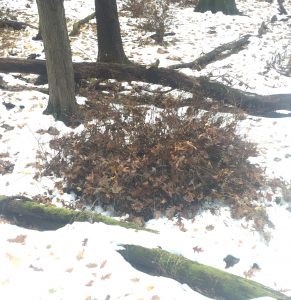 A barberry bush that has caught itself a blanket of leaves to keep itself warm during the cold winter months.

Taking this lesson back to the Park, we collect lots of leaves from the sides of the road and use them to cover up the garden beds for winter.

This layer will not only protect against frost damage, but it will also decompose in the spring into rich soil to feed the garden. This leaf blanket is much better than plastic row covers, as it uses local, renewable resources and feeds the soil rather than polluting it. We can also think about how we can incorporate this leaf-catching function into nurse plants around the bases of young trees to help them make it through their first few winters.

The next lesson is in fencing and dealing with hungry animals.

Walking around, I noticed two large trees that had fallen parallel about four feet away, and two smaller branches that had fallen perpendicular to the two trees. These downed logs created a sort of pen in between them that makes it much more difficult for large animals like deer to get into that space, thereby protecting the plants inside from browse.

In the Park, there have been some issues with deer eating the young trees (this is actually an issue everywhere due to the extermination of the wolves, but we’ll save that for another post). We opted against fencing in the whole park because, while it would keep out deer, we feared it would also keep out people, which goes against our mission.

What this example shows us is that we don’t have to fence off the whole park, we can just build barriers around the most vulnerable plants,

like the young persimmons and hazelnuts, until they are large enough to be mostly out of reach of the deer. 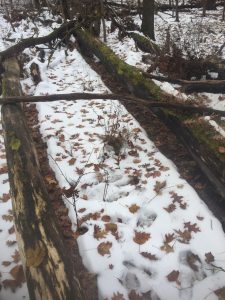 A small pen created from falling logs that helps protect the plants inside from deer browse.

Hopefully you find these lessons useful and interesting, and hopefully this motivates you to go out and Observe & Interact with systems like forests, fields, and rivers so you can learn some lessons from them as well. And when you do, we hope you will share them with all of us here as well!