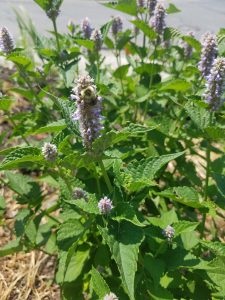 A bumble bee on Anise Hyssop

Modern day industrial agriculture uses an obscene amount of pesticides and herbicides in order to maintain any reasonable level of productivity. These chemical concoctions of the “Green Revolution” are hailed as being nothing short of a miracle in how they have enabled us to produce cheap food for the masses. But how effective are they really?

Industrial agriculture gets around nutrient deficiencies in the soil by tilling and adding inorganic fertilizers. While it might seems like this solves the problem, it actually makes it worse. Tilling the soil floods the microbial community with oxygen, and combined with the nitrogen from synthetic fertilizers, the microbes go into a feeding frenzy.  Since these microbes need about 20-30 times more carbon than nitrogen, they end up depleting all the carbon-based organic matter from the soil, releasing it as CO2. Carbon-based soil organics, known as humus, act a store for nitrogen and other soils minerals like potassium. When the humus is depleted through the use of inorganic fertilizers, it reduces the ability of the soil to hold onto the very nutrients supplied by the fertilizers, landing the industrial farmer on a never-ending treadmill where they constantly need to use more and more fertilizer, most of which ends up in the watershed and causes aquatic ecosystems to collapse! [4]

Humus is also an excellent store of water, holding up to 6 times its weight, meaning depleted soils require more irrigation to remain productive. [4]

On top of all that, and the point of this post, is that depleting the organic matter causes the soil ecology to collapse. Many of the microorganisms that live in the soil play critical roles in supporting plant life, making certain key nutrients available and providing antibiotic compounds to protect the plants from infestation. With the soil depleted, the only microorganisms that can survive are the ones that feed on the crops, and without a balanced ecology, these disease-causing fungi and bacteria explode into epidemic proportions! Industrial farmers turn to toxic chemicals in an attempt to sterilize the fields, but these can only be so effective, and they have serious consequences on human health, leading to all kinds of cancers and birth defects. [5]

Industrial agriculture gets caught in the same slippery slope when it comes to insect pests. In a healthy, balanced ecosystem, there are all kinds of predator bugs like spiders, wasps, and ladybugs that keep populations of plant-eating insects like aphids under control. Many of these predator species require pollen and nectar as an additional food source, but the flowering species that would produce said pollen and nectar are completely absent in the industrial monoculture. As a result, the pest populations that feed on the crops multiply without constraint. The industrial farmer then turns to toxic pesticides to thwart the infestation, but inevitably some will survive. The pesticide also kills any remaining predators, and since predator populations are necessarily smaller than prey populations, the result is a higher ratio of pest to predator species. This only makes the pest problem worse with each additional application (not even accounting for the very real issue of pesticide resistance), leading industrial farmers to use more and more pesticides at the expense of ecosystem and human health. [4]

According to statistics from the USDA, American farms today use twenty times the pesticides we did fifty years ago but suffer twice the losses to insects and disease. [4] Clearly this system is spiraling into catastrophe, so how do we break this cycle?

At the Southside Permaculture Park, we negate the need for toxic, polluting fertilizers by building deep, rich soils through compost and mulch. Plants like comfrey, chicory, and turkish rocket provide organic matter as well as a diverse profile of mineral nutrients. Leaves collected in the fall also provide an abundant source of carbon from something others consider waste. Nitrogen fixing plants like clover, honey locust, and sea buckthorn provide the critical nitrogen to the soils in proportions that don’t deplete the organic matter. Healthy soils fed with compost also harbor a diverse community of microbes that keep diseases from taking over. Integrating multiple flowering plants and diverse habitats attracts predatory insects and birds that keep pest populations in balance. This system is NOT dependent on massive inputs of fossil-fuel-derived fertilizers and toxic pesticides and instead builds itself stronger over time, leading to healthier individuals, a healthier ecosystem, and a healthier, more resilient community overall.

The forests managed to keep themselves healthy for hundreds of millions of years without synthetic pesticides or external fertilization by using and valuing diversity; we can do it too. 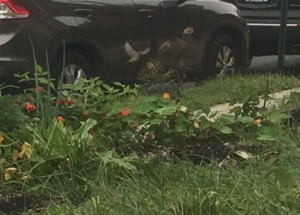 7 Sparrows feeding on insect pests and seeds in a bed along the sidewalk. Can you spot them all?